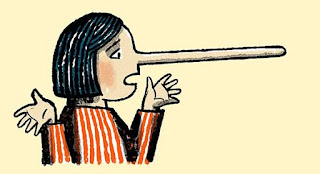 A few weeks ago, as part of his normal evening ritual, my almost 3-year-old son used the potty, brushed his teeth, and climbed into bed. As we were saying our night-nights, he interjected: “Mommy, I need to use the potty.” It had been about six minutes since he’d gone. I suspected he was trying out a new bedtime stall tactic, but I couldn’t not let him try. He sat on the potty.
We waited. Then: “I don’t need to go.”

I had just caught my son in a lie—the first I’d ever noticed. The next night, it was the same thing all over again. I had no idea what to do.

So I started reading the research on childhood lying. Turns out there’s a lot of it, because by studying how and when children lie, psychologists can glean new insights into psychological development. I, of course, was more interested in the practical applications: How do I keep my kid from turning into a sociopath? Dozens of research papers and several phone calls later, I’ve learned that not only is lying completely normal in kids, it’s actually a sign of healthy development. And yes, there are things parents can do to foster honesty in their kids—things that I haven’t been getting exactly right.

If your kid has been lying, “that’s very, very normal,” explains Kang Lee, a developmental psychologist at the University of Toronto who has been studying lying in children for 20 years. Generally, kids start to lie by around the age of 2½ or 3, usually to cover up transgressions. In a classic 1989 study, researchers at the University of Medicine and Dentistry of New Jersey took individual 3-year-olds into a room equipped with a hidden video camera and a one-way mirror and sat them facing away from a table. The researchers told the children they were going to put a surprise toy on the table and instructed the kids not to look at it. Then the researchers left the room. They returned either once the children had peeked at the toy (most did) or after five minutes had passed, and asked the kids whether they had looked. A whooping 38 percent of the kids who had snuck a peek lied, assuring the researchers that they hadn’t seen the toy. In a similarly designed 2002 study co-authored by Lee, 54 percent of 3-year-olds lied about peeking, whereas more than three-quarters of kids aged 4 to 7 did.

Note this;’When kids lie, it’s not a sign that they’re on the road to delinquency—it’s a sign that they are developing important psychological skills’. One is “theory of mind,” the ability to recognize that other people can have different beliefs or feelings from you. In order to lie, your child has to realize that although he knows full well that he broke your vase, you do not. Lying also requires “executive function,” a complex set of skills that includes working memory, inhibitory control, and planning capabilities. Your kid has to hide the truth, plan up an alternate reality, tell you about it, and remember it. Good job, kid! So kids who lie are demonstrating important cognitive skills. But paradoxically, they also lie in part because they don’t have great cognitive skills. As I’ve written about before, children are emotional and impulsive—they struggle a lot with inhibitory control, one aspect of executive function—which is why, despite your clear instructions not to, they will continue to use their forks as drumsticks and hit their siblings. Then, to cover up their mistakes, they’ll lie to avoid getting punished. In other words, kids lie a lot in part because they can’t help but defy you a lot, and they don’t want to suffer the consequences. Can you blame them? One easy thing we can do to keep our kids from lying is to avoid setting them up to do so. If you know full well Nathan ate the last cookie, you don’t need to challenge him with Nathan, did you eat the last cookie? That’s just asking him to fib—he can sense trouble is just around the corner, and he wants more than anything to avoid it. Instead, say something like, “I know you ate the last cookie, and now you’re not going to have room for dinner, and unfortunately the consequence is going to be that you have no cookies tomorrow,” suggests Angela Crossman, a developmental psychologist at CUNY’s John Jay College of Criminal Justice. (If you do desperately need to extract the truth out of your child, ask him beforehand to promise you that he will tell you the truth. It may sound silly, but it helps: One study found that 3- to 7-year olds were 16 percent less likely to lie after promising to be honest. Suckers.) Another thing you should absolutely not do, Lee says, is to tell your child that you won’t get mad at him if he tells you the truth, and then get mad at him for telling you the truth. Parents do this all the time, he says, and it teaches kids that truth-telling gets punished, that they’d be better off lying.

“You really have to live up to your end of the bargain—if your child tells the truth, then you say ‘that’s great,’ and just ignore the bad behavior, regardless of how bad it is,” Lee says. (If you know you can’t follow through—for instance, if the transgression you’re asking about is really terrible—don’t make such a promise in the first place.) OK, but when you do catch your kid in a lie, what should you do? First, because lies often go hand-in-hand with misdeeds, you need to separate the two in your mind. You have to address the fact that your kid broke the TV, and you also need to address the fact that she lied about it—but don’t conflate the two, because they’re different. If your kid broke the TV but was actually honest about it, you should, hard as it may be, commend her for her truth-telling even though you’re ready to kill her about the TV. “Say, ‘I’m glad you told me that it was you who broke the TV, but I’m still really concerned,” says Victoria Talwar, a developmental psychologist at McGill University who studies lying in children and frequently collaborates with Lee. Simply put, the best way to address a child’s lie is calmly. Use the moment to talk to him about the importance of honesty. “Point out what he has just done, and tell him what you expect him to do, which is to tell the truth regardless—and tell him why it’s important to tell the truth,” Lee says. Explain the importance of trust. Lee cautions against punishing kids—particularly young preschoolers—for lying, because they often do not fully understand the concept of honesty. Punishing a kid for lying can also backfire, because kids understand that they only get punished if they are caught lying, so they may continue to lie but simply be more careful about it. Instead, consider praising them when they are honest and repeatedly stressing the virtues of honesty.

When Lee and his colleagues tested how well various stories curbed kids’ tendencies to lie, they found that the story of George Washington and the Cherry Tree, in which Washington confesses to chopping down his father’s tree and is commended for doing so, was far more effective than The Boy Who Cried Wolf, which warns against lying by highlighting its negative consequences. Also, in general, research suggests that children raised in punitive authoritarian environments—in which they are harshly punished either verbally or physically—are more likely to lie than are children who are punished for transgressions more gently, for instance with time-outs or scolding. So strict, punitive parenting practices are not necessarily the best approach to raising honest children. All this said, don’t be afraid to discuss and even employ natural consequences to deter your kids from lying. Tell little Susie that if she keeps lying, you may not always be inclined to believe what she says. And if your kid, like mine, lies about needing to use the potty to stall bedtime, tell him he gets one chance to go potty before bedtime, at whatever time he chooses; if he plays the potty card when he doesn’t really need to go, he may end up uncomfortable—or even soil himself—later on, which may be the very lesson he needs. (Unless you are in the middle of potty training—then all bets are off.)

What should you do if you think your kids’ lies are a sign of a deeper problem? Excessive lying, particularly in older kids, can be a symptom of conduct disorder, attention-deficit hyperactivity disorder, or oppositional defiant disorder, so if you’re worried, talk to your pediatrician or consult a child psychologist.

Generally speaking, Lee says, kids who have behavioral problems tend to not only be frequent liars, but also poor liars. (Little kids are generally bad liars—particularly when they’re asked follow-up questions—but by the time they’re 7 or 8, they get pretty good.)

Sun Jun 11 , 2017
Continuing the respect talks… I took the liberty to carryout little Google works,Searching out what respect actually is… Respect is a feeling of admiration or deference toward a person, […]