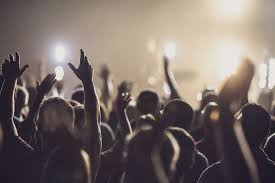 Many times we wonder what’s wrong when we sing and it feels like it isn’t ministering to people or the ‘spirit’ isn’t moving. I have wondered long and found out this simple clue… but I’m glad it wasn’t just me alone who discovered this… Check this out!

GOD IS NOT IN THE SONG

This title seems kinda weird Right? Wait till you hear what God has in store for you today.
like David would assign…

To the minister,
There was this time a friend of yours was asked to come up on stage to lead the session of worship. He came up and began with a song which went like ‘ Elohim, Adonai, ah ah ah ah Elohim’ (My NCCF Bauchi friends will understand). He took the song like twice and before you knew what was happening, the occurence of 2nd Chronicles 5:14 was already unfolding before your very eyes. Maybe the following Sunday, someone else came up to lead the worship and he sang the same song as before and there also came a manifestation of God’s presence. Then it came to pass, your own turn to lead the worship and what other song could you think of but……. Elohim, Adonai, ah ah ah ah Elohim’.
Alas! After singing it as many times as you could think of, nothing seemed to happen. You could even catch a glimpse of people in the congregation yawning . Then you ask yourself, what could possibly be happening? The answer, my friend, is simple… GOD IS NOT IN THE SONG.
I guess you have heard of this saying “God moves in mysterious ways, his wonders to perform”? It is true. God is not limited to one mode of operation. He is unpredictable in his move. Ask Elijah and he will tell you 1st kings 19:11-12 . However, one thing God keeps constant as a prerequisite for all his moves is A contrite heart and A broken spirit (Psalms 34:18a and Psalms 51:17).
The song, no matter how beautiful or melodious it is, is merely a ritual if it doesn’t come from a contrite heart and a broken spirit. The most local of songs, the most ancient (or old-school) of songs will hit the very heart of God to bring him down from his throne if it proceeds from A contrite heart and A broken spirit.

God is not in the Song, so where then is he??

HE IS IN THE HEART FROM WHERE THE SONG COMES!!

Learnt what it is to break free yet?

I always thought I couldn’t enter without getting struck by lightening. Amidst all my courage, the journey was still frightening; The door wasn’t locked, it never was. I guess you left it that way so I would never get lost. It had […]

Listening to myself being engulfed in a song is quite it for me when it comes to mind connecting worship. This simple sing along song is really all you need to get your day on. Just stay connected. P.s: You might want […]

Two steps to the rightAnd to the left,Faces not seeming lightLike they were happiness bereft. Twas dusk before noonAnd the songs decided to take a napTwo minutes to the program Leaving the leader franticLike an unsteady ship Soon the heat of the […]

What’s up,Wondering how you’re faring… Hope you’ve been good? (use the comment box)Alright, i see many people interested in music or should i say singing… but usually get bamboozled by some of the terms being used there,Oh well, as your loyal *finder […]

This is a sequel to the post ‘God’s not in the song’. You’d definitely love this! Whether you are leading for the first time or are a seasoned veteran, it is always important to prepare a praise and worship session. Here we will […]

Writing is the only way most times, I communicate with the world outside my head. Better still, it's my way of life. I write Love. Faith. Truth. Life. Society. We're not that different. I'm Shobb's.

The Whistle Is Our New Alarm

Quotes Of The Day

It's true that time heals all wounds, But love is it's medicine.;