Yes, so you’ve been wondering… ‘which one is real again oo’?
You remember sometime last year Livingstone gave us a reason to TWALE .
Now he’s driving us towards the part of GOD’s realness.
You really should anticipate this one as some other are – not in the tunnels anymore but pipelines. 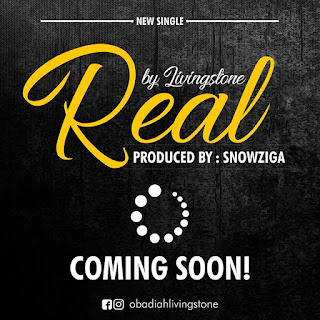 A Little about Livingstone that you should know.

Obadiah Livingstone, fondly regarded as “Young Diamond” or “Jesus Soldier”, is a Gospel/Inspirational music Artiste who hails from Nasarawa state in Nigeria.
He is an Afro pop artiste but has not limited himself to just one genre of music. In showcasing his versatility, he has recorded tracks in almost all genre of music- though yet to be released.

He started writing music back then in his primary school days.
He first performed one of his songs at his school’s graduation party and got massive love from the audience. He continued writing and singing his own songs in his local church (ECWA) until he decided to take his craft to the studio.
He recorded his first track in February 2017 after which he met the CEO of Snowziga production with whom he built a good relationship. Working together, he released another single tilted TWALE -which he recorded alongside members of his crew(TMG).

In November 2017, the “Jesus Soldier” announced that he would be releasing another single which he titled Real – produced by same Snowziga.
Anticipate!!!!

An abstract of my thoughts on the COVID-19 pandemic. (Sighs) There’s a call for persistent prayers ongoing. An assurance that the virus won’t be a part of us in due time. Revelations and prophecies are springing forth mixed reactions and several opinions […]

Basic school rules do apply here also. Write “A Love Letter to time” expressing your pithiness. What would yours look like? Here’s Mine. Dear Time, I’m not a stranger to the dark and that’s because I’m quite stark; And in it I’m […]

Have you said thank you Jesus today? Jesus walked by tenhealed nineBut, made one whole.Why? Ordinary Thank You Jesus ooo. Well, you see,There’s a difference between being healed and being whole.Let’s word play; When you’re healed, there’s a mark or call it […]

Nothing is more worse than missing an opportunity that would have changed you life..  And if you don’t take risk you will end up working for someone who does..My advice is for you to be a part of this and get to […]

Writing is the only way most times, I communicate with the world outside my head. Better still, it's my way of life. I write Love. Faith. Truth. Life. Society. We're not that different. I'm Shobb's.

The Whistle Is Our New Alarm

Quotes Of The Day

It's true that time heals all wounds, But love is it's medicine.;