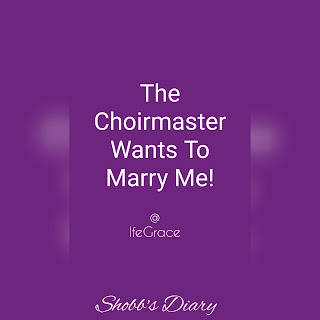 My hand went up. When I looked around and saw I was one raising my hand, I quickly put my hand down. But the choirmaster had already seen me.

‘That sister over there. Come out.’

I felt faint. All eyes were on me as I stood up. Why did I raise my hand? What if I messed up? As I walked to the front, the lyrics of the song disappeared. I was clearly nervous as I stood before the choirmaster who was holding a microphone.

He touched my shoulder slightly and smiled. ‘Breath in.’

I did as I was told.

I exhaled. But that didn’t stop my hands from trembling.

I sighed. The choirmaster picked up his guitar and motioned to the keyboardist to pick the right key. Slowly, I began to sing and then I increased my tempo, forgetting everyone around me. When I finished, I raised my head to find the members of the choir staring at me.

Bro Daniel’s mouth and eyes were wide opened. The choristers clapped and began to whisper among themselves. The choirmaster quickly gave out orders. He would take the first stanza, I’ll come in at the second and we’ll both take the third stanza together. By the end of the rehearsals, the choir room was charged. The members of the choir were standing up and jumping as they chanted the chorus. The rehearsals ended in some serious prayers.

I made quite a number of friends afterwards, but somewhere in my heart, I wondered how long before I become the object of envy. For that reason I tried not to get too close. On my way out of the church after one of the rehearsals, Bro Daniel blocked me at the entrance.

I smiled. ‘I am God’s beloved child.’

‘Jesus! You are so good. I’ve never met someone with such powerful voice.’

The praises showered on me by the members of the church got to me. Clips of my ministration were posted on social media and before I knew it, I began to receive calls from people I had never met.

When I saw how this was affecting me, I went on my knees again and reminded myself that I did not belong to myself but to God. Every Sunday morning after dressing up for church, I would recite this verse I had pinned to my heart from the living Bible.

I can do this only because Christ’s mighty energy is at work within me.

Six months after I joined the choir, something happened. An experience that opened my eyes to something new.

My mentor had fixed an appointment with me at her house and even though I had met her on Instagram about two years ago, It would be my first visit to her .How did I get to steal the heart of this woman whose powerful songs are known across the globe? A woman whose name was on the lips of many Nigerian christians? I had stumbled on an old primary school friend who happened to be her cousin. Omo, I didn’t let her cousin rest o until I made him take a recording of a song I had written.

Few days later, I received a call. She loved my voice and was moved by my song and we exchanged numbers. I asked if she could mentor me. She agreed. We built a very strong relationship that has helped my music ministry so far. She taught me what it took to become a music minister beyond having a good voice. She showed me the ropes I needed to reach others for Christ.

I can’t forget a statement she made while we were chatting one evening..

‘Yewande, if you want to keep touching lives for Jesus, build roots downward so you can draw nourishment upward from a daily communion with Jesus .’

When I got to her house that day, the housekeeper led me to a beautiful bungalow behind the main building. It was a place that served as her studio.

I entered to find her husband strumming a guitar while she worked on a song. I was intrigued seeing my mentor and her husband work together. In my mind, this was a perfect union. That moment, I had a strong desire to marry and I wanted a man like my mentor’s husband. A picture flashed across my mind, drawing a sweet feeling of excitement.

At the next rehearsal, Bro Daniel played the piano this time instead of the guitar, I kept stealing glances at him. Smart brother! he noticed. He winked at me. All I could think about was how together, our ministry will flourish just like my mentor.

I was getting ready for bed when his call came in.

‘I just called to check up on you.’ He said, in a rather husky voice.

Desire flooded my heart as I sat on the bed. I didn’t want him to end the call even though I was tongue-tied. It was clear that we had strong feelings for each other.

That night, I wrote out in my journal the things I saw us doing together, in the future. It was a plus that he knew how to play the guitar, piano and the trumpet. We would talk about songs in the morning, while we bath our kids, before we slept. Wasn’t I lucky?

Bubbling with excitement, I couldn’t sleep until past 4a.m. I just kept thinking of how wonderful our marriage would be. Our dreams aligned. We were passionate about God. Our ministry would go to the ends of the world. Glory!

I had a dream that night. I was lying on the ground, famished. The place looked like a desert. There were no trees, only sand. Then I saw Bro Daniel come out of nowhere bare chested. He grabbed my hand and began to drag me. I was shouting, ‘please’ but he didn’t listen. I woke up, scared.

The Choirmaster Wants To Marry Me | Surrealism

Tue Dec 18 , 2018
…Knowing this, that our old man is crucified with him, that the body of sin might be destroyed, that henceforth we should not serve sin. […]