I couldn’t relate to Lydia, Esther or Ruth
I wasn’t like them and that was the truth.
I was a Gomer, a Rahab and most of all a Dinah.
In my own world I could swear I was a Hitler.
Like a sculpture, had a body like Bathsheba’s,
I wasn’t a sheep, DEFINATELY not the shepherd’s;
Smart business woman I was a Delilah,
But Hallelujah for the devil was a liar. 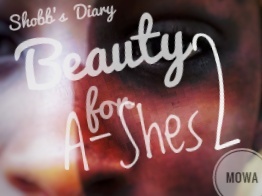 Cos he told me
My kind of sins even God had not seen,
Yunno that kind of thing is so very mean.
So I opened the scriptures and started getting pictures that in this race I had found GRACE!!!

Prior, full of lies, darkness and deceit
My sins were paid for, Holy Ghost the receipt;
Eternal life to all of them that received
Many ambitions, now all I’ve achieved.
Was heart broken, He made me broken hearted,
Then He whispered “I haven’t even started!”

Was a dullard,
He made me a teacher
Was rich,
So I thought, but he made me richer!
Was bossy, he made me
A bond servant;
Twas a surprise cos I was born a tyrant.
My eyes were hauty he made them single,
Was shy and fearful but now I can mingle
Wasn’t patient, he made me a waiter
Now I love but before…
A hater
Damn good player, I didn’t need a fore runner.
Was lonely, he made me a comforter
Was suicidal he made me a martyr
Now a “Mary” but before I was a “Martha”
Was scared of heights now I soar as eagles.
Twas grace, I know,
… I call it Beauty for A-shes,
‎simply put, I became BeautyFull Ashes.
Mowa

Mon Jun 3 , 2019
How many people have benefitted from your blessing? Are you still selfishly guarding what you should sparingly hide? Are you still looking at what you […]